Codemasters is preparing to close down its Guildford studio, which was responsible for Bodycount. The shuttering will affect the 66 employees, who were informed today about the 30-day consultation shut-down period (based on the studio’s size), required by UK law.

"As we look to take greater leadership in the racing category, Codemasters is proposing a studio structure that adds resource and strengthens our best-in-class racing teams," a company spokesperson said in a statement. Those being laid off are being "encouraged" to apply for positions at Codemasters’ Warwickshire HQ (Dirt, Grid, F1 Online) and the Birmingham studio, which is working on a new racing IP.

Bodycount’s "poor design choices and lack of any compelling moments" didn’t sit well with us, nor with critics in general, and earned it a Metacritic score in the low-50s. The game premiered in 36th place on the UK charts two weeks ago, then disappeared. It’s a IP that’s not likely to be heard from again. 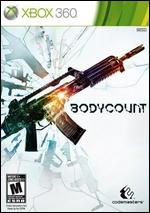