During its pre-TGS event, Team Ninja lifted the veil (or mask) over Ninja Gaiden 3’s competitive multiplayer mode. The mode will connect up to eight players in a sort of ninja tournament, in which the goal is to beat all the other ninjas, rank up and ultimately surpass Ryu Hayabusa. It’s a "world of ninjas," as online engineer Ueda put it.

At the event, producer Yosuke Hayashi also introduced the new "play style system." In addition to the normal and hard difficulty levels, Ninja Gaiden 3 offers a choice of two "play styles," Ninja and Hero. Ninja is the familiar style of gameplay, but Hero adds things like auto-block and auto-dodge, to let new players just "enjoy the story." That is, the story of a blood-crazed, cursed ninja putting swords into people. 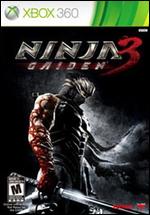