Halo: Combat Evolved Anniversary looks nicer for sure but is still largely the same game we first played ten years ago. Kinect support is a non-visual feature that has the potential to really differentiate the remastered game from the original Xbox FPS. A big part of what Kinect provides is voice control support which may not immediately sound compelling, but one component of it will be of particular interest to fans of Halo lore.

Franchise development director Frank O’Connor told last month that an example of the Kinect voice support is allowing players to switch between the original and updated graphics by saying, "Classic" or "Remastered." He said more actions would be revealed in October, and true to his word they now have been, including some that replace simple button presses and others that provide an all-new experience.

The most straightforward voice commands include the ability to reload or throw a grenade. For some that could be a neat gimmick; I know if I try it I can see myself reaching for the grenade/reload button with my finger each time I think to say the words. For longtime fans it may be a hard habit to break.

Whether or not that’s something you want to try out, a Kinect-only Analyze mode is much more interesting. You can use your voice to bring up a Metroid Prime-style scanning interface that allows you to scan different enemies, weapons, vehicles, and characters. This then unlocks them in the Library. Not to be confused with the campaign mission of the same name, the Library lets you use gesture controls to examine a model of the subject in question and read associated canonical information.

If you’re without Kinect but have a Windows Phone device, the new Halo Waypoint ATLAS app will provide some new Halo Anniversary and Halo Reach features when it’s released later this year. With the app (ATLAS stands for Advance Tactical Assault System) you can view maps of Anniversary and Reach maps showing teammates’ movements in real-time. It sounds like a neat idea, only it seems like it would be hard to make good use of while continuing to play the game effectively.

Also new are custom challenges that you can ask your Xbox Live friends to compete in such as getting a certain number of multiplayer headshots within 24 hours. Challenges can be created for campaign, Firefight, and multiplayer; completing them can unlock credits in Halo Reach.

As a final treat for Halo fans, High Noon was announced at New York Comic-Con this past weekend. As previously suspected based upon earlier trailers, classic Halo: Combat Evolved map Hang ’Em High will make a return as one of Anniversary’s multiplayer maps. 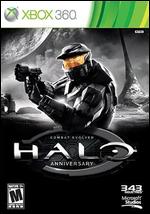