Following previous rumors that a bundle of the first three Devil May Cry games would be released this year to celebrate the series’ 10-year anniversary, Capcom has announced it plans to bring out a remastered collection of all three next year.

ESRB listings for the trio were updated not long ago with Xbox 360 and PlayStation 3 being added as platforms, so we knew they would be coming in one form or another. Today’s press release notes that they will be upgraded to feature HD graphics, bonus content of some kind, and Achievements/Trophies.

Capcom recently released HD versions of two Resident Evil games -- Code Veronica X and 4 -- albeit in a different form. Whereas the Devil May Cry bundle is headed to retail, both Resident Evil games were sold individually through the Xbox Live Marketplace for $20 a piece.

This month marks ten years since the first DMC game was released in North America on PlayStation 2. DMC2 and 3 followed in 2003 and 2005 in North America, respectively. In 2006 a Special Edition of DMC3 came out that added Dante’s brother Vergil as a playable character, a new survival mode, Turbo mode (featuring faster gameplay), and other new content. It’s this Special Edition that will be included in the HD Collection.

Devil May Cry 4 is left out for obvious reasons -- it’s already available on the current generation of systems. A brand-new game is also in the works right now called DmC: Devil May Cry. 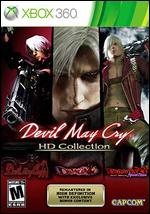