Deadlight Turning on XBLA This Summer

Not much is known about Deadlight at this point, but the new screens definitely show some promise. Look for more info on Deadlight soon. 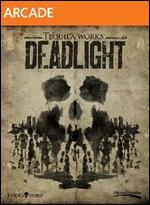