Los Angeles, Calif. - Nov. 6, 2012 - Today Codemasters® announced that a demo for F1 RACE STARS will be available for download this week ahead of the game’s race into retail on November 13th. In the demo players will experience FORMULA ONE powered-up on the F1 RACE STARS Germany track in both single-player and up to four-player split-screen. On every straight, hairpin and jump, players will experience F1 RACE STARS’ unique brand of superfast FORMULA ONE racing as they race through a Bavarian castle, accelerate on the autobahn and fly through a forest.

In the demo players can race as Jenson Button, Fernando Alonso, Sebastian Vettel or Kimi Räikkönen and compete against with other official and fictional FORMULA ONE drivers, transformed into heroic caricatures that are bursting with personality.

In the sprint for the checkered flag, gamers can utilize a range of fantasy and FORMULA ONE themed power-ups, from calling in Wet Weather to slow the pack, deploying DRS to speed past rivals and using a range of sneaky bubbles to trap other drivers. If their car takes damage, gamers can race through the pit lane to get back up to speed, whilst a variety of different routes, boost pads and shortcuts will all slingshot players ahead.

To mark the news, Codemasters has released a new gameplay video showcasing some of the features set to take FORMULA ONE over the top. The trailer shows FORMULA ONE stars zooming past giant sumo robots in Japan, racing through a carnival in Brazil and dodging a Truckosaurus in the USA on F1 RACE STARS’ unique circuits. In a super-charged sprint for the checkered flag, the trailer shows the drivers using different power-ups - including Safety Car, Teleport and DRS - to gain the advantage on their rivals and race around special KERS corners to get a speedy boost. The video is now playing at www.F1racestars.com.

Gamers who purchase from www.gamestop.com and at Gamestop retail stores will receive the F1 RACE STARS Valencia Street Circuit Edition as a gift with purchase, while supplies last. Those that preorder are guaranteed to get this special edition, which includes a free download code for an additional European Track set around the speedy city streets of Valencia, Spain, where gamers can race through a marina, speed across super-slippery ice and dodge flying tomatoes in single-player, split-screen and online.

Coming November 13 for Xbox 360, PLAYSTATION®3 and Windows PC, F1 RACE STARS is in production at Codemasters Racing Studios, the home of the BAFTA award-winning series of Official FORMULA ONE video games, and is being created under exclusive worldwide agreement with Formula One World Championship Limited.

Fans can see the trailer and keep up to date with all the latest news about F1 RACE STARS by visiting www.F1racestars.com, liking the game at www.facebook.com/f1racestars or following the team on twitter at www.twitter.com/f1racestars 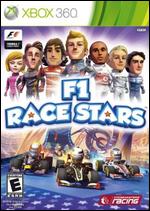