Minneapolis, MN - November 20, 2012 - Universes are about to collide as Activision Publishing, Inc., a wholly owned subsidiary of Activision Blizzard, Inc. (Nasdaq: ATVI), and Twentieth Century Fox Consumer Products announced today that Family Guy: Back to the Multiverse is now available at retail outlets nationwide. The console video game takes the source material from the Family Guy series, including its hilarious sense of humor and outrageous spirit, to offer fans an unforgettable, interactive third-person action experience.

Family Guy: Back to the Multiverse introduces an all-new original story written and voiced by Family Guy talent and influenced by the famous Family Guy season eight episode, "Road to the Multiverse", where Stewie and Brian travel on an out-of-this-world journey through Quahog’s bizarre parallel universes. Gamers will travel through all-new settings on a mission to save Quahog and stop the destructive schemes of Bertram, Stewie’s nemesis. Playing as either Stewie or Brian, each equipped with unique special weapons and abilities, gamers will encounter an array of Family Guy characters, references and gut-busting jokes. Additionally, fans can share this hilarious experience and invite friends and family to jump into the wild Family Guy world through drop-in/drop-out co-op multiplayer mode and competitive multiplayer challenges.

Family Guy: Back to the Multiverse is now available for the Xbox 360® video game and entertainment system from Microsoft and PlayStation®3 computer entertainment system for a suggested retail price of $59.99, and is rated M (Mature) by the ESRB. For more information, please visit www.facebook.com/Familyguythevideogame. For more information on the animated series, visit www.familyguy.com. 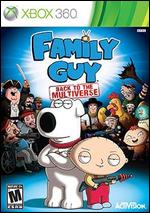