Ridgewood, NJ, November 27, 2012 - Publisher Kalypso Media and developer Realmforge Studios are pleased to show off a selection of exciting new screenshots from DARK, the upcoming action-RPG for console and Windows PC. The captivating new screenshots will give gamers a deeper look into the characters and environments found in DARK, as well as showcasing the game’s unique 3D cel-shaded art style. DARK is a supernatural third-person stealth action game where players will explore the shadowy world of a vampire anti-hero as he fights against the forces of the GeoForge Corporation in an attempt to shed light to their dark secrets. DARK is scheduled for release Q2 2013.

DARK is a stealth action game with RPG elements that lets you slip into the role of the ultimate killer... a vampire. Stalk your enemies from the shadows then use powerful vampire abilities to attack and silently dispatch them! The exciting story of DARK immerses you in a world full of blood and darkness in which the hunter can become the hunted at any time. As you unravel the mystery behind the omnipresent and powerful global conglomerate, Geoforge, you must continually improve your character by developing powerful skills to aid you in remaining unobserved, or silence those unfortunate enough to take too keen an interest in you. 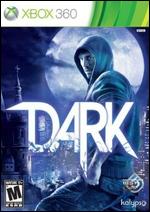