TORRANCE, California - November 27th, 2012 - Aksys Games, a publisher of interactive entertainment software, is proud to announce that two more contests to celebrate the 3rd anniversary of BlazBlue are currently live: "Caption the Blue" (http://li.brari.us/cb) and "All Eyes on the Azure." (http://li.brari.us/sx). This time around, hopeful contestants must either create a creative caption for a preset image, or simply help spread the word on an upcoming event via Twitter. The prizes for both contests are exclusive items provided by Arc System Works and are must-haves for both casual and hardcore fans alike!

As a reminder, fans can enjoy new pricing on BlazBlue Continuum Shift EXTEND! With added features, all the Continuum Shift DLC characters and Relius, this is the game to buy and any serious fan should to prepare for what’s to come!

BlazBlue: Continuum Shift EXTEND has been rated T (Teen) by the Entertainment Software Rating Board (ESRB). More information about Aksys Games, BlazBlue, and the BlazBlue contests can be found at www.aksysgames.com/blazblue/. 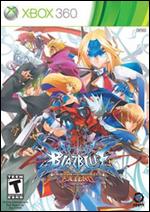