Capcom is throwing its hat back into the retro compilation ring. To celebrate the company’s 30th anniversary, the publisher will release the Capcom Arcade Cabinet, a collection of "numerous classic Capcom games as digital downloads."

Looking at the official announcement on Capcom-Unity, it appears the first confirmed game in the collection is Black Dragon (known in Japan as Black Tiger), a platform game released in the arcades in 1987. It is considered a "spiritual successor" to Ghosts ’n Goblins.

Other games to be part of the collection include Avengers and 1943, based on leaked achievements. Oddly, those are the only other games mentioned in the game’s achievement list, suggesting that other titles in the compilation must be purchased as DLC. More details are promised next month in a more detailed official reveal. 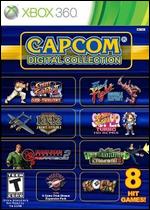