Disney Infinity, the ambitious game that brings together various Disney franchises, is being pitched as a "platform" that will constantly update with new toys and playsets to collect. That means the team at Avalanche will be preparing to roll out characters for unreleased Disney movies, and part of that includes putting some future assets on the disc.

VideoGamer reports that Disney Infinity will get a new version every year, updated with content to cover the next 12 months. The version that releases this June, then, would presumably have assets for content coming all the way through June 2014. Executive producer John Vignocchi says he has warned the film producers that their upcoming characters could be outed before their time if hackers poke around in the data.

This is a temporary measure, he said, to account for the data limitations of current consoles. "In the future, as we move on to new versions of consoles we’re going to be able to digitally deliver that content, and the figurines themselves will simply be dongles that allow us to then instantiate a download of that content."

He also pointed out that Skylanders ran a similar risk, putting its expansions on the disc. But since Disney Infinity features established properties, it may be more prone to hackers curious to see what’s coming up. 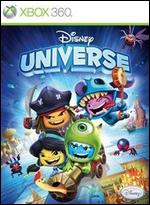