Skulls of the Shogun is now available worldwide

Skulls of the Shogun is an invigorating cocktail of 1960’s-flavored sorcery and strategy. Washed up on the shores of the afterlife, players meet and join forces with vibrant ghost-samurai warriors, magical animal-monks, and mustachioed samurai generals on the way to capture the Skulls of the Shogun in a 15-hour single-player campaign. Skulls of the Shogun also features up to four-player local and online multiplayer battles.

Also, for the first time ever, players will be able to challenge their friends, fight their way through online multiplayer battles, and even take their single-player campaign on the road asynchronously — whether they’re playing on Xbox 360, Windows 8, Surface, or Windows Phone. Called Skulls Anywhere, this cross-platform gameplay has never been done before on Microsoft platforms and is available on all four launch platforms!

“After three and a half years, Skulls of the Shogun is has been released into the wild!” says 17-BIT Founder and CEO, Jake Kazdal. “We’re ecstatic we could bring Skulls to all four of Microsoft’s platforms, and bring them all together with cross-platform functionality. We appreciate the excitement and patience by all the Skulls of the Shogun fans, and we here at 17-BIT believe the wait will be well worth it.”

Skulls of the Shogun will be localized in English, French, Italian, German, Spanish, Korean, Japanese, Brazilian Portuguese, and Russian. 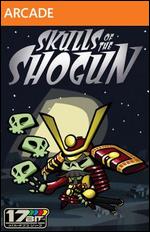