Star Trek has been in development for about three years at this point, which is a "huge amount of time when you’re talking about a movie game," Paramount Pictures Senior Vice President Brian Miller told us during a GDC-adjacent demonstration of the game earlier this week.

"Most movie games that we’ve ever worked on, and I would say most people ever work on, you’re lucky to get twelve months," Miller said. "You’re in the middle of production on a movie, you’re trying to hit a target date of when the movie comes out, all the assets aren’t in there, so you wind up having to rush things through."

In Star Trek’s case, however, the situation was reversed – development on the game was extended by a full year in order to coincide with the release of Star Trek Into Darkness, the franchise’s latest theatrical romp.

An entire extra year may seem like more than "a little more development time," but that’s the sort of call you get to make when you’re Paramount. Miller told us that while interaction between Paramount, developer Digital Extremes and writer Marianne Krawczyk was an "amazing collaborative back-and-forth," Paramount’s wishes are still, well, paramount. 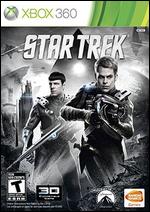