Soooo, the Minecraft is doing well. 4J Studios, developers of the Xbox 360 version of Minecraft, announced on Twitter recently the game has sold over six million units. The Xbox version of the game began the year at a little over the five million mark.

Minecraft for Xbox 360 is set to receive title update 9 in the near future, along with the digitally distributed game taking a pickax to retail on April 30. Across various platforms, Minecraft has sold over 20 million units. 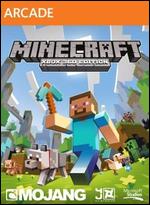