Eschborn, June 19, 2013 – Thunder Wolves has landed on XBLA and PSN, bringing with it a permanently reduced price on Steam.  From Hungarian developer, Most Wanted Entertainment, Thunder Wolves is a helicopter game inspired by ’90s arcade games and action flicks – paper-thin plots, endless supplies of disposable henchman, and explosions everywhere.

Adrenaline-junkie mercenaries for hire, the Thunder Wolves will take any mission head-on, destroying everything between them and victory. With local co-op – one as pilot, one as gunner - you and a friend can even double-team the opposition. For more information: http://www.mwent.hu/games/thunder-wolves or www.bitcomposer.com 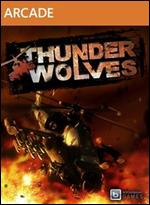