See the first screenshots from the new Rocky game from Rage Software.

Rage Software has released the first official screenshots from Rocky. The screens, which are taken from the Microsoft Xbox version of the game, show off virtual replicas of Sylvester Stallone’s character Rocky Balboa and Carl Weathers’ character Apollo Creed from the Rocky films. In the game, players can take part in both single- and multiplayer boxing action. Although the game has the requisite exhibition and training modes, the primary mode of play is the so-called movie mode. Here, players assume the role of Rocky and must fight lower ranked boxers in order to advance to more high-profile fights against opponents such as Creed and Clubber Lang. Rocky will be released next year.

Check out the Rocky Gamespace!

Read more about it.
Source: http://www.gamespot.com/ 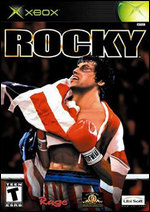