Grand Theft Auto V Gunplay is stepping it's game up 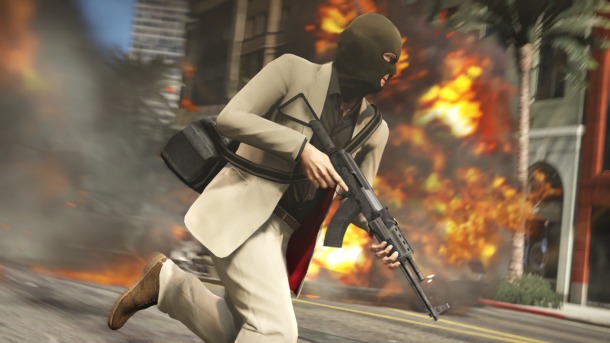 Grand Theft Auto has never been known for its gunplay. Rockstar has struggled to make combat in the GTA games satisfying--something they’re trying to fix for Grand Theft Auto 5.

It’s been over five years since GTA4, and Rockstar has released a number of games since. Red Dead Redemption and Max Payne 3 refined gunplay quite significantly--and Rockstar says "influences" of those two games can be seen in GTA5.

Combat designer Phil Hooker says the gameplay is still "GTA-based at its core," but the game attempts to "bring in all the appropriate parts... from the more advanced cover components and targeting of Red Dead Redemption tot he more fluid transitions in and out of gun combat from Max Payne 3."

As a result, there are now three aiming modes to toy with: assisted aiming, traditional GTA, and free aim. "Assisted aiming gives players a larger targeting area as well as a little more help analyzing targets to try and pick the largest threat," Hooker described to Game Informer. "Traditional GTA is the closest to previous GTA’s soft lock option. It shares all the characteristics of assisted aiming, with the additional ability to flick left and right between targets using the right stick."

Regardless of which mode you play with, every aim mode has a timer that breaks your lock. That means you can’t simply lock on and shoot until a target is dead. You’ll have to be more tactical. Hard lock-on has also been axed, as it was "too disorientating and often broke your immersion with the game."