DICE: Next Star Wars game is Battlefront is well into development

"We showed 22 seconds of where we’re going with it and the fan response was very positive," commented Gibeau. "The DICE team is well into development on that product already, so we feel very bullish about our shooter rotation over the next several years."

Star Wars: Battlefront also "has a third-person component to it", Gibeau confirmed, suggesting the game will retain the previous games’ option to switch between first and third-person perspectives.

The game is said to be being created by the Battlefield team using the Frostbite 3 engine.

A release date for the title has yet to be announced. 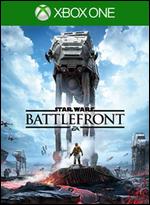