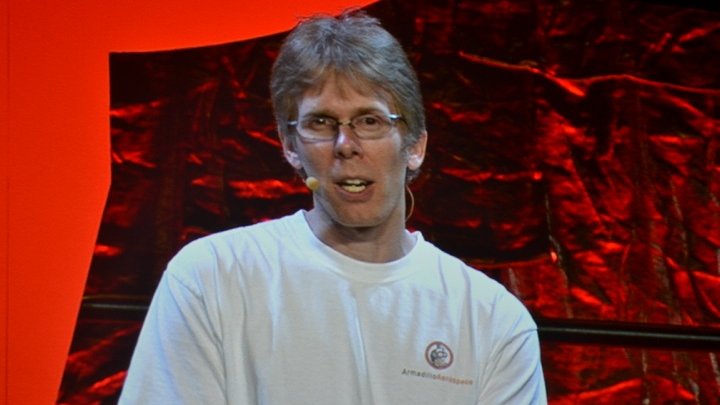 id Software technical director John Carmack is impressed with the Xbox One and PlayStation 4, but said he hadn’t done enough benchmarking to crown a winner in the next-gen console war during his infamously lengthy QuakeCon 2013 keynote address.

Carmack kicked off his speech by addressing the "elephant in the room," discussing the arrival of a new console generation to a crowd of attendees at the largely PC-focused event. He’s optimistic about the coming console cycle, commenting that it’s "obviously going to be a good thing for gamers, developers, and an excellent thing for AMD." He said he hasn’t run quite enough tests on the hardware for the two consoles, but said they’re both "very close, and very good."

When asked for an A-over-B comparison, however, Carmack is slow to judge.

"It’s almost amazing how close they are in capabilities, how common they are," Carmack said. "The capabilities they give are essentially the same."

He confessed that in the current generation of consoles, he preferred developing on Xbox 360 — its development tools, in general, "felt better," Carmack said. He’s optimistic about the backend changes that Sony has enacted in previous years, though, and that he’s seen the company making "large strides" towards courting developers and making their tools more accessible for them.

Carmack also commented on Microsoft’s always-on Kinect and recently reversed DRM policies for its upcoming Xbox One. He says the concern over having the Xbox One’s Kinect always watching them will, in retrospect, turn out to be a fairly brief concern, comparing it to the short-lived controversy over the inclusion of GPS locators in modern cell phones. On the subject of the Xbox One’s former DRM regulations, Carmack said he falls "a bit on the side of the witch hunt was a bit unjustified, there." Optical media, he argues, will be extinct in the gaming world sooner rather than later.

"The future is obvious right there, and it will be good for us in general," Carmack said.

He’s less of a defender of the Xbox’s focus on Kinect, an interface he said he’s still "not really sold on."

"I recognize that what my needs and desires as a game developer or what I use the technology for might not cover the broad consumer base that they’re looking for, so it’s their play to make," Carmack said. "I think Kinect still has some fundamental limitations with the latency and frame rate on it. Interacting with it is still ... when you interact with Kinect, some of the standard interactions — position and hold, waiting for different things — it’s fundamentally a poor interaction.

"One way that I look at it is — I used to give Apple a lot of grief about the one button mouse," Carmack added. "Anybody working with a mouse really wants more buttons — [they’re] helpful there. Kinect is sort of like a zero button mouse with a lot of latency on it."

Carmack also expressed a desire to spend more time with the other gaming platforms on the market — a prospect he admitted to not having enough time to explore. He said he wanted to get last year’s Doom 3: BFG Edition on the Wii U and PlayStation Vita, but their limited install bases couldn’t generate enough interest "on the publishing side." He’s not especially bullish about the future of handheld gaming as a whole, arguing that its being dwarfed and strangled by the booming mobile gaming market.

"Everyone’s carrying a pretty good gaming platform already," Carmack said, "and trying to get a new one in there is kind of a harder sell."