Head over to xbox.ign.com and survey a wealth of new information -- impressions & screens -- on Kain’s Blood Omen 2.

At the plush Menlo Park, Ca pad of Crystal Dynamics late last week, IGN was treated to an exclusive behind-the-scenes look at the latest rendition of Blood Omen 2. The arcade-adventure game stars the legendary vampire Kain, who hasn’t had his own game since the November 1996 PlayStation debut of Blood Omen: Legacy of Kain. 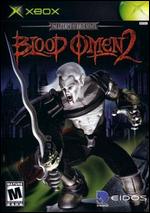