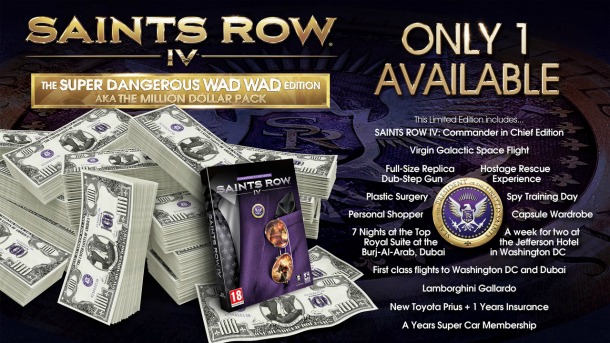 If you like your video games big, dumb, and all kinds of fun, you can’t beat Saints Row.

If you also like your games preposterously expensive, you can’t beat Saints Row.

Publisher Deep Silver has revealed an extremely limited edition version of its upcoming Saints Row IV -- and by “extremely limited,” we mean there is one copy available. That’s because the “Super Dangerous Wad Wad Edition” costs a ludicrous $1 million.

Exclusive to UK’s GAME store, the package contains the ’Commander in Chief’ version of the game -- a $60 value -- and a list of luxurious insanity that makes $999,940 sounds like a bargain. In addition to the game, you’ll walk away with:

- A full day of spy training

- A space flight courtesy Virgin Galactic, so you can appropriately look down on the rest of us

- A new Toyota Prius plus one year’s insurance, in case you crash the Lamborghini

- A 7-night stay at the Jefferson Hotel in Washington, D.C.

- First-class flights for two to get to your somewhat less awesome hotel room in D.C.

- A full-sized replica of the game’s Dub-Step gun

- A ‘hostage rescue’ experience, whatever that is

- Plastic surgery of the purchaser’s choice, presumably to obfuscate their identity to loved ones who cannot believe they just spent $1 million on all this crap

- A shopping spree with a personal shopper, because you can’t drive a Lamborghini in those jeans

(Yahoo’s) friends at Forbes actually priced this all out, and yeah, $1 million is definitely in the ballpark for this madness. Which, I will again stress, is real. You can actually buy this thing, provided you have the funds and are fully committed to ignoring the advice of your family.

While this is unequivocally the most expensive video game package ever (if you can even call it a ’video game package’ at this point), second place isn’t that far off. In May, GAME partnered with Codemasters on a special edition of the racing game Grid 2 that clocked in at a now-cheap $188,000.

Despite the PR Hail Mary, Saints Row IV is shaping up to be one of the year’s biggest games. It releases August 20 for the Xbox 360, PS3 and PC. 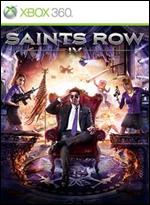