By now you’ve probably heard all about how different retailers are offering different deals for different next-gen games. Here’s all you really need to know. If you pick up Madden NFL 25 for the Xbox 360 you’ll have the opportunity to snag a copy on Xbox One for as little as 10 dollars at participating retailers. Yep, a brand-new $10 game. That’s not been a thing since well, ever.

So with that in mind why would you want to wait around for next-gen when you could start playing Madden NFL 25 right now? Your friends are going to have the game, and they’ll totally create this amazing Connected Franchise and have all sorts of cool stories and inside jokes you’re not a part of, all because you’re the equivalent of a Madden hipster who doesn’t have the game and is trying to convince them to play Madden NFL 08 ironically. Don’t be that guy, nobody likes that guy.

Also, the NFL season is about to start, and you need to be able to play the upcoming slate as your favorite team, because superstition dictates that if you win in Madden NFL your team wins in real-life. That’s just a law of the universe, except for the teams that lose each week. That’s not your fault though, that’s some jerk three towns over who sat in a different chair than last week or didn’t eat the proper pre-game meal or washed his lucky underwear. Karma is fickle that way, but you need to keep doing your part.

Lastly – and most importantly – you’ll want the extra time to practice. This year, there’s a brand new precision modifier that you need to master, not to mention all the new stuff in Owner mode and Connected Franchise. If you try and take on your buddies in next-gen and you’re coming in cold, you’re going to get creamed. Then they’ll make fun of you for being bad at Madden and you’ll start to resent them and maybe even ruin a lifelong friendship, all because of a video game. That’s not cool; Madden NFL 25 wants to build relationships, not destroy them.

So; don’t be a hipster, help your team and strengthen your bonds with friends, all for as little as $10 more than you were going to spend anyway. Look, we’re not going to go all used-car salesman and start shouting about how this is “THE DEAL OF THE CENTURY!” and a “LIMITED-TIME OFFER!” You don’t want that, we don’t want that and besides, it’s tacky.

What we’re trying to say is that this is like winning double-prize money on a game show. It’s that day you found a four-leaf clover AND a lucky penny on the sidewalk. It’s that time you ordered a single scoop of ice cream and then you got an extra scoop and the cute girl behind the counter gave you a wink and a smile. To paraphrase The Human League; don’t you want double-Madden baby? Don’t you want it ooo-oooooh? 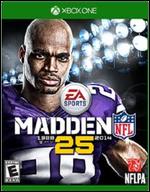