Microsoft and Capcom Vancouver gave fans a first look at co-op multiplayer and Super-combo weapons, a brand-new addition to the franchise.

In “Dead Rising 3’s” online co-op mode, you can take on the zombie horde with a friend over Xbox Live, with the ability to hop in or out of each other’s game at any time. When playing in a friend’s game, you’ll not only help them advance, but also contribute to your story progression and earn experience points that carry back into your own game. Any mission you finish in a friend’s game will also register as “complete” in yours, so you’ll never have to go back and replay a co-op mission to advance your single-player story, unless you want to experience it again.

Co-op players will assume the role of Dick, a wise-cracking trucker who sees the main character Nick Ramos as his best chance at getting out of the overrun city of Los Perdidos, and plays a key role in the “Dead Rising 3” story.

In addition to showcasing co-op, Capcom revealed Super-combo Weapons – a new tier of Combo Weapons that requires at least three components (and oftentimes multiple steps and blueprints) to craft, and features unique abilities that let you decimate crowds of zombies with devastating effect. Examples include the Ultimate Powershout, a deadly concussive horn made of traffic cones; the Ultimate Grim Reaper, a flaming scythe made of a katana sword, a scythe, a gas canister and a mask; and the Massive Bomb, a mini-nuke that obliterates every zombie in your vicinity – along with your clothes.

Not only are Super-combo Weapons ultra-powerful, but they can also be customized into a wide range of different variants with unique abilities. For example, the fan-favorite “Freedom Bear” from “Dead Rising 2,” a life-size stuffed bear turret armed with twin machine guns, can be customized into eight different variants in “Dead Rising 3” with modifications like grenade launchers, a push cart and a boombox lure to confuse the zombies. With hundreds of Combo and Super-combo Weapons, “Dead Rising 3” takes customization to the next level in the ultimate zombie sandbox and gives you and your friends a virtually limitless number of ways to fight back against the undead horde. 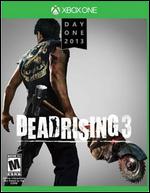