Maverick Recording Company plans to release a standalone soundtrack album for the upcoming Tony Hawk’s Pro Skater 3 XBOX game. The album will be titled "Music From and Inspired by Tony Hawk’s Pro Skater 3" will include preview footage of the game, an interview with Tony Hawk, behind-the-scenes footage of Tony practicing at his local skate park, and rare footage of his trademark trick, the elusive 900. This jam packed soundtrack will be available in stores this October. The planned release date for now is October 16, 2001. I’ll post more information as it becomes available.

Here is the full list of the featured tracks: 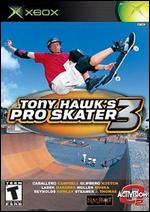