Xbox One Celebration Continues In Toronto 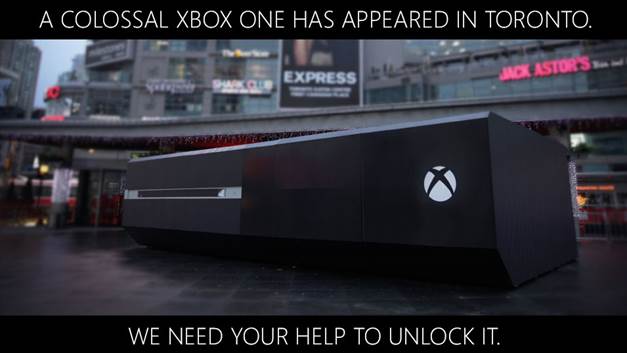 TORONTO – November 17, 2013 – Today, the colossal Xbox One appeared for a third time, this time at Yonge-Dundas Square in Toronto. The larger-than-life console – part of the project known as One Source - brings together the Canadian Xbox Live community to celebrate the launch of Xbox One.

By pledging with their gamertags, fans can unlock amazing one-of-a-kind experiences and rewards like the “Dead Rising 3”-inspired zombie uprising in Vancouver and the heart-pounding “Forza Motorsport 5” speed drives at Circuit Gilles Villeneuve chin Montreal. Every gamertag pledged will contribute to unlocking these experiences.

“We are building on the momentum we created in Vancouver and Montreal to celebrate the biggest launch in Xbox history in unprecedented ways,” said Craig Flannagan, Director of Marketing, Xbox, Microsoft Canada. “We are drawing on the best exclusive games, the best multiplayer experience and service and great entertainment to celebrate this launch with most dedicated community around.”

Canadian Xbox fans can pledge with their gamertag to One Source in three ways: either in person at the console, through the Xbox Live Dashboard, or online at www.xbox.ca/onesource. Fans that take part early will have more chances to win great prizes, and as community support grows, fans will continue to unlock unique, immersive experiences, that can only be provided by Xbox.

To learn more about One Source or to pledge with your gamertag, visit the Xbox Live Dashboard or www.xbox.ca/onesource.