Max: The Curse of Brotherhood available now for Xbox One

Max: The Curse of Brotherhood Draws Near on Xbox One

Max: The Curse of Brotherhood, (December 20th) on Xbox One, is what developer Press Play is referring to as a “Cinematic Puzzle Platformer,” meaning that it is a puzzle game first and foremost, with platforming, exploration and a focus on storytelling. In this title, Max, equipped only with a powerful Magic Marker and his wits, attempts to make it across a hostile fantasy world in order to rescue his kidnapped brother.

Earlier this week, I spoke with Press Play Studio Director Mikkel Thorsted about what to expect when you play.

Jeff Rubenstein, Xbox: Xbox gamers might not be familiar with your previous title, Max and the Magic Marker. How is it related to and how is it different from Max: The Curse of Brotherhood?

Mikkel Thorsted, Press Play: Max: The Curse of Brotherhood is a re-imagining of the original idea behind the previous title, rather than an actual sequel. Basically, we wanted another go at it, only much, much more ambitious. When we made the last game, we were fewer people, less skilled, and did not have access to the kind of budget we do now. Max: The Curse of Brotherhood is by far the biggest game we’ve made to date and we are very proud of the final result. The new game is bigger in every way – more story, more puzzles, more powers, and more worlds.

Xbox: What new elements does Max bring to the platforming genre?

Press Play: There are a lot of puzzle platformers out there these days, so it is hard to stand out as totally unique. But we believe our Magic Marker is rather special – we have spent a lot of time and effort on making it feel and play really well with a controller, and I like to think that shows. On top of that, our ambition was to make a “proper” world in our game, so there is a lot of depth to our world compared to a lot of other 2.5 platformers. You are never going to see platforms floating in mid-air or the world being presented in cut-sections. If something is in the world, it is there in a way that makes sense.

Xbox: What types of abilities does Max’s marker present to players?

Press Play: Throughout the game, Max and the Marker unlock new ways to interact with the environment. Scattered around the world are glowing nodes – basically tears in the fabric of reality where Max is able to tap into the raw magic of the world – and depending on the kind of node, Max can create trees to climb, pillars of earth to lift giant boulders, make geysers of water shoot him dozens of feet into the air or fire great balls of fire at his enemies – just to name a few examples.

Xbox: Talk about your approach to gameplay prompts – Kotaku praised the fact that the game lets you figure it out instead of hand-holding. Was that a conscious decision?

Press Play: Very much a conscious decision, and we’re extremely pleased at the way people react to it. There seems to be a trend in many games at the moment where the level of handholding goes to absolutely absurd levels, and we really wanted to avoid that. As far as we’re concerned, that level of handholding is not respecting your players, that’s demeaning them. We want to appeal to players that don’t need to be told how to jump, and who can derive a level of satisfaction from figuring things out on their own simply through intuition and (hopefully) clever level design. As far as we’re concerned, that aspect of discovery simply heightens immersion to the benefit of all.

Xbox: What does working on the Xbox One allow Press Play to accomplish?

Press Play: Well, it’s a whole other ballgame in terms of sheer power, obviously. We can lather on the polygons, shaders and advanced lighting and not have the machine die on us. But perhaps more importantly, it is a lot closer to a regular PC in terms of game development, which means more time spent on making games and less on figuring out the arcane rituals needed to make it do what you want.

Max: The Curse of Brotherhood is now available for Xbox One and will arrive on Xbox 360 in early 2014. 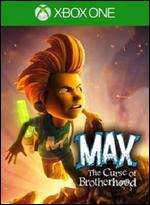