Xbox One Premium OneGuide features will come to Canada eventually

One of the Xbox One’s biggest draws, and arguably one of the few features setting it apart from the PlayStation 4, is its ability to take over your living room entertainment system through the console’s HDMI-in OneGuide.

This unique feature allows Xbox One owners to plug a digital cable box into their Xbox One and watch television through the console’s user interface, giving users access to everything the Xbox One has to offer, while watching TV. Flipping between gaming and TV is performed with the press of a button or a simple voice command. 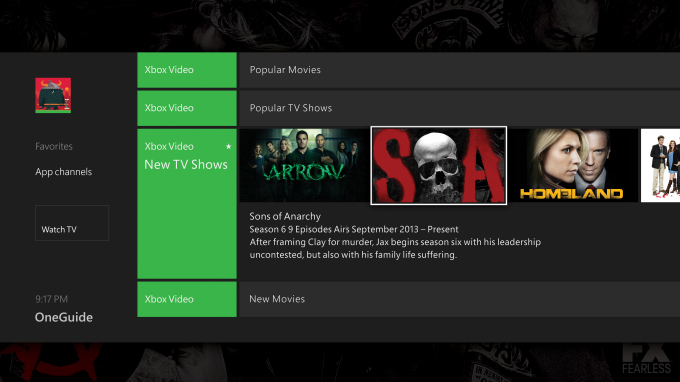 See this cool One Guide premium feature? Well it doesn’t work in Canada, a least not yet.


While Canadian Xbox One owners can currently hook their cable boxes into the Xbox One, OneGuide’s premium voice navigation features, allowing users to view and navigate their cable boxes channel list with voice commands, still aren’t available in Canada.

During a recent interview Larry Hyrb (Major Nelson), the director of programming for the Microsoft gaming network, revealed that premium OneGuide features will come to Canada eventually, but there still isn’t a timeline for their release.

“We want to make sure everybody can access this that would like to access it. One of the challenges is that there are all sorts of business conversations that have to take place that things are working. Our goal is absolutely to bring it to as many people as want it, it’s part of our value proposition with Xbox One – with the HDMI input and making sure that Xbox One is input one. So that is definitely something we want to do,” said Hyrb.

It looks like Canadians hoping to channel surf by yelling commands at their television could still have  to wait awhile.