Murdered: Soul Suspect coming to Xbox One as well as Xbox 360

After it was shown at last year’s Electronic Entertainment Expo, Square Enix’s “Murdered: Soul Suspect” quickly became the talk of the show thanks mainly to the fact that the term “supernatural detective thriller” is a description that’s bound to get any gamer talking. The only question was whether or not the game would make its way to the Xbox One. Amateur detectives that we are, we spent considerable time and effort trying to track down the truth. Not only did we confirm that, yes, “Murdered: Soul Suspect” will be coming to Xbox One, we managed to actually go hands-on with the game at a clandestine location inside developer Airtight Studios.

“Murdered: Soul Suspect” casts you as Ronan O’Connor, a small-time hood that’s gone straight to become one of Salem’s (yes, the one with the witches) best and brightest homicide detectives. Ronan’s backstory is told during an extended intro via his many tattoos, each of which he got during a seminal moment of his life. The game packs an awful lot of story-telling into the opening, including the final present-day sequence in which Ronan, ever the renegade cop, decides not to wait for backup when pursuing a murder suspect into an apartment building.

Naturally, this is a big mistake, and Ronan quickly finds himself struggling for life after being dramatically thrown out of a fourth story window to the street below. This is actually the moment in which the player first takes control, trying to align Ronan’s spirit with his flesh in an effort to keep him from dying. Unfortunately for Ronan (but fortunately for anyone who loves a good yarn), all of those efforts are for naught, as the murder suspect ends up casually strolling over, taking Ronan’s gun, and putting seven slugs in his chest.

Now that Ronan’s really dead, the fun can begin. First up is a very brief tutorial from the spirit of a creepy little girl whose dated fashion sense would indicate that she died during the Salem witch trials. She has Ronan follow her around town a bit while she explains that ghosts can move through certain materials and inhabit the bodies of the living. Perhaps not surprisingly, Ronan learns that he’s stuck here even after his passing because he still needs to attend to something. This is just a shot in the dark, but maybe that “something” is “solving his own murder”?

Returning to the scene of the crime, Ronan walks in on his former homicide associates investigating the area and interviewing witnesses. “Murdered” uses a nifty text overlay to give players hints as to what needs to be done to progress. In order to find the killer’s trail, Ronan must possess a beat cop to steal a glance at his notes, inhabit a witness in order to jar her memory, and even take over one of his fellow detectives to eavesdrop on a conversation. While in another’s body, Ronan will need to use equal parts deduction and common sense to get the information he needs. It’s an easy-to-use, intuitive system that we’re looking forward to seeing develop further.

Once he figures out how to get inside the apartment building from which he was thrown, Ronan is tasked with making his way upstairs. Seeing as how we’re wannabe detectives and all, we decided to take a little detour to solve a crime that wasn’t even our own. As you progress through “Murdered: Soul Suspect,” you’ll come across fellow spirits that, like Ronan, can’t move on to the great hereafter until whatever wrong is keeping them there is righted. In the case we saw, an elderly couple provided the key to figuring out how a young junkie died. Once we told her what had really happened, she disappeared in a flash of white light after thanking us. It’s clear that Square Enix has plenty of side missions in place to keep would-be detectives busy for hours.

Back on the trail of his killer, Ronan proceeds upstairs and bumps into his creepy little friend again. She breaks down more of what it means to be a ghost, which includes showing Ronan some spectral graffiti that only ghosts can see. It becomes clear that Ronan has a number of unseen powers that can be unlocked and upgraded as you progress through the game, though we don’t have any specifics yet. We’re hoping these powers come in handy against the frightening demon Ronan comes across next. While “Murdered: Soul Suspect” doesn’t seem to feature any traditional combat, it’s clear that there will be some intense moments mixed in to keep players on their proverbial toes.

Finally out of danger, Ronan makes his way up his destination, where more clues are in need of finding. As was the case with the scene on the street, Ronan must use a combination of deductive reasoning and ghostly gumshoeing to figure out where to go next, including reading the leftover emotional cues from a witness that needs to be found. The game seems to have found a perfect blend of innovative gameplay mechanics and good old fashioned puzzles, so we’re really excited to see how the story plays out.

Now that we can confirm that “Murdered: Soul Suspect” is coming to Xbox One, it’s time all of you would-be detectives start sharpening your deductive skills to help Ronan. 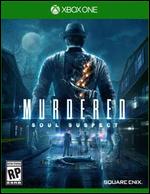