This just in from Stephen Clarke-Willson...

Just to let you know that we’re driving toward making a release candidate. Today we have 8 active bugs out of a total of 5,500 that have been entered over the course of the project. We’re putting in a few final tweaks and making sure the game is 100% solid.

The MP3 I’ve sent you is title music composed by Jeremy Soule and performed by the musicians of the City of Prague orchestra. Also those screenshots I’ve sent you are some "never-before-seen" screenshots.

Thanks for your support! Azurik is the biggest, baddest adventure game ever made. We just had a very good tester at Adrenium, Lizz, who had never seen the game before play it through from start to end, and it took about 96 hours (no hints or help from anyone on the team). This is a really big game. 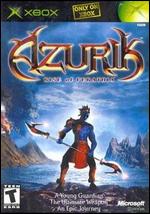