This is a pretty good deal for existing Xbox One and Xbox 360 owners alike.  Pre-order Titanfall for either Xbox 360 or Xbox One from the Microsoft Store website before 6pm on March 9th, and Microsoft will throw in a free $10 XBox Gift Card! 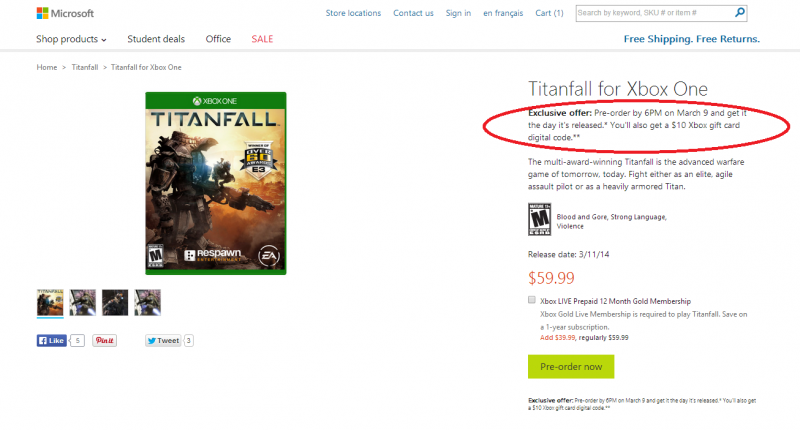 Microsoft’s retail locations are also advertising an offer that’s equally as good, depending on how you like to shop. If you pre-order your copy of Titanfall in person at a Microsoft Store or kiosk, you’ll get a $10 Microsoft Retail Store gift card instead.  The fine print says that the offer is limited to 5 per customer, which means if you’re buying multiple copies of the game for friends or family, you can get up to $50 in Xbox Store or Microsoft Retail Store credit.  Currently, no other retailers are offering similar discounts on Titanfall, so for Canadians at least, this appears to be the best deal on Titanfall in town.

N.B. If you don’t have Xbox Live Membership Gold Membership (which is required to play Titanfall), you can also save $20 off of a 12-month Pre-Paid Gold Membership card by adding one to your pre-order via the optional checkbox (as seen in the picture above). Adding the card to your order separately won’t offer the additional discount, so make sure to order the game and membership card together.