Strike Suit Zero: Director’s Cut will be released April 8 for Xbox One and PlayStation 4.

The Director’s Cut will include previously released DLC, including the Heroes of the Fleet campaign. It will be available for physical purchase and download in North America for $20 USD.

An update of the original space dogfighter, Strike Suit Zero: Director’s Cut will include two additional Strike Suits: the Marauder and the Raptor. A restructured campaign and improved graphics, textures and lighting will also enhance the title.

The original Strike Suit Zero released for PC January 23, 2013 and Mac and Linux on August 9, 2013. The in-game mech and spaceship designs are courtesy of renowned game designer Junji Okubo, whose giant robot creations can be found in several games, including Steel Battalion for the first generation Xbox. 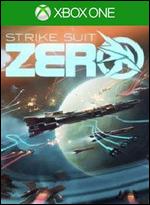