Enemy Front was built by CI Games, formerly City Interactive, which is best known for the Sniper: Ghost Warrior Series.

The game, created with Crytek’s CryEngine, was announced back in 2011. At the time Stuart Black, creative director of Codemasters’ ill-fated FPS Bodycount and, before that, designer at Criterion on PlayStation 2 and Xbox shooter Black, was spearheading the project. But it seems Black left CI Games in August 2012. 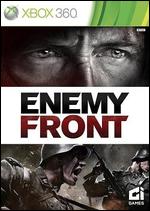