Criterion, developer of Burnout and Need for Speed, revealed its next game during EA’s E3 press conference today. The game has no title yet, but the first-person, “action sports” title has vehicles at the center and Oculus VR on the mind.

Criterion’s Matt Webster told IGN very little about the new game, but emphasized, "At the heart, it’s got to come from absolute excitement and exhilaration, it’s got to be underpinned by beautiful vehicle controls. And we’re going beyond cars, as you can see."

In an early video featuring prototype footage, we see a player leap from a chopper, land on an four-wheel ATV, and speed past other players as the helicopter crashes. "That sort of sets the tone," Webster said. "Clearly we’ve got some very good ideas."

Some of those ideas involve virtual reality, something Webster’s team has been experimenting with for its mysterious new vehicle game. "Playing this prototype on Oculus is...is...awesome. We’ve always liked to be at the forefront of new technology, so when that stuff comes around you’ve got to embrace it. It just so happens that with the experience we’ve got, we have an incredible opportunity with a first-person experience."

The first-person perspective and variety of activities — piloting choppers, driving ATVs, flying with wingsuits, etc. — is, for EA COO Peter Moore, “indicative of what we’re seeing right now in what young male consumers in particular consuming sports video. So much of this is adrenaline-based, rushes. It’s risky, but all new IP is risky, and it gets Criterion out of the whole racing games mode, it gives the studio different things to work on to reignite them.”

Criterion had spent some time working on the Need for Speed franchise, which will not return until 2015, when Ghost Games intends to do something "dramatically different" for the racing brand.

Criterion’s development team on this project is very small. "We shrunk down," Webster said. Earlier this year, Criterion co-founders Alex Ward and Fiona Sperry left the studio, which had fewer than 20 employees as of September 2013. "We explored a bunch of things last year." Eventually the team of "20 to 25" started gaining traction on a concept, and it’s been working on the new, nameless game for about six months. Read more on Websters thoughts on Criterion here.

The unnamed project currently has no release date. 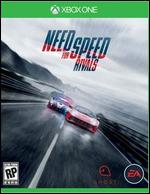