Xbox Live’s Aceybongos and I will interview Sledgehammer Games,the creators of Call of Duty: Advanced Warfare interviews and debut the new multiplayer trailer. Watch it all unfold below, or, if you’d like to watch from your living room, launch the live events player on your Xbox One or Xbox 360.

UPDATE: the event has concluded, but you may enjoy a full replay here. 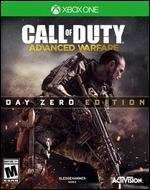