When State of Decay debuted on Xbox Live last June, it broke a number of genre gameplay conventions: characters die permanently, story progression isn’t pre-scripted, and the world continues to change even when players are offline. Fans responded enthusiastically to this “zombie survival fantasy” spin on the genre, ensuring a bright future for the State of Decay franchise.

So what’s next for State of Decay? In Spring 2015, Xbox One owners will have the opportunity to experience the definitive version of State of Decay with the Year One Survival Edition. Earlier this week, we paid a visit to Undead Labs’ studios to learn more:

The State of Decay: Year One Survival Edition will include the original State of Decay, now running in glorious 1080p, previously released Add-Ons Breakdown and Lifeline, as well as some entirely new content. Undead Labs will reveal more on the new content closer to release, and you’ll read about it here when they do. 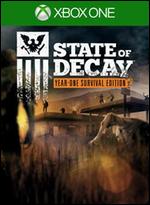