Game Description: Set in an abandoned sawmill nestled high in the Italian mountains, Anna challenges the player to uncover horrific clues and use them to solve puzzles related to your character’s dark past. The player’s behavior does not only determine the mental health of the main character but can also change locations and unveil new secrets leading to one of eight possible endings.

Game Description: ATLUS and Arc System Works team up once again to produce the next deadly broadcast on the Midnight Channel! The P-1 Grand Prix tournament is barely over, but the P-1 Climax has already begun. A mysterious red fog settles over the real world and the Persona-users assemble anew to apprehend the culprit once and for all. The time to settle accounts has come. The events of Persona 4 Arena reach their thrilling conclusion in the massive story mode of Persona 4 Arena Ultimax! New playable characters, including fan favorites from the Persona 3 and 4 RPGs, add even more breadth to the already diverse roster. Master new skills, systems, modes, and “Shadow” versions of characters, and challenge the world’s best players in online matches. 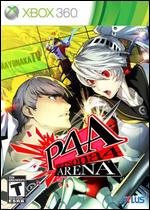