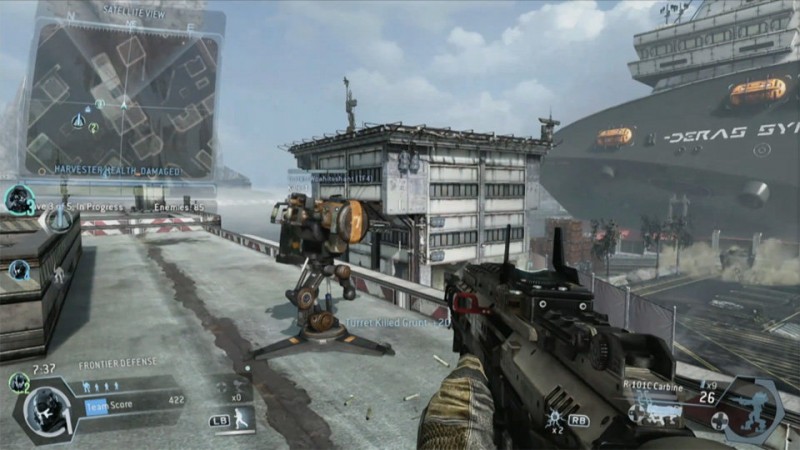 Frontier Defense is a Horde mode-esque battle that pits four players against increasingly difficult waves of AI enemies, including "a bunch of different enemy types" that are entirely new to Titanfall, said designer Jason McCord during the livestream. Frontier Defense will be playable on all 24 of the game’s maps; the livestream consisted of a few rounds on Angel City. A Harvester was drilling for resources on behalf of the Militia, and the players had to defend it from IMC attackers. Players can place turrets around the map to assist them, and switch loadouts and replenish ammo in the middle of a match at loadout crates. And those who die will return to battle in a dropship, and can rain down damage during the flight.

Respawn showed off some new Titan types in Frontier Defense. Arc Titans are Striders equipped with Arc Cannons, and they’re also surrounded by a ball of electricity that quickly drops the shields of any opposing Titan — and of the Harvester. Mortar Titans sit back on the outskirts of the map and fire shells at the Harvester. They’re joined by plenty of grunts and Spectres, including Suicide Spectres, which rush players and explode. Teams will get a rating from one to three stars depending on how well they do.

Frontier Defense, the first of three new modes, will arrive in Content Update 8. The others are Deadly Ground (Nov. 5) and Marked for Death Pro (coming Nov. 26). In the former mode, the floor is electrified smoke, which "encourages players to really use wall-running abilities," said Respawn community manager Abbie Heppe. According to McCord, the studio had "kind of jokingly talked about" implementing something like the mode for a while.

Content Update 8 will also introduce Ranked Play, a new system of level progression in the main game aside from Generations, the game’s prestige mode. It doesn’t apply to Frontier Defense, but in other modes, you’ll earn points with good performance that go toward tiers in a ranking system that resets on the 1st of every month. Other features coming in the update include sudden death in capture the flag mode, a score-based grading system with stars for every map, new graphics quality settings on Windows PC and improved load times. Check out the blog post from Respawn for all the details.