Celebrities do voices for SSX Trick

A variety of celebrities will provide the voices for the characters in Electronic Arts’ SSX Tricky.

Electronic Arts has announced that a celebrity cast of voice talent will be used for its upcoming snowboarding sequel SSX Tricky. Lucy Liu, Oliver Platt, Macy Gray, and David Arquette are among the celebrities who will lend their voices to the eclectic cast of characters in the game. The celebrity voice-overs will be incorporated into each character’s prerace, in-race, and postrace dialogue. Additionally, the final look of the characters in SSX Tricky will draw inspiration from their voice-talent counterparts.

"I love to play video games myself, but not having done this before, I really didn’t know what to expect,’’ Platt said. "I just took what was on the page and tried to make it as big and stupid as possible. I don’t actually snowboard, but I guess I do now. Who knows, maybe after playing SSX Tricky, it’ll be automatic."

"I love video games,’’ Gray said. "Now that I’m a video game character, I feel like I’ve made it, I’ve finally arrived.’’ 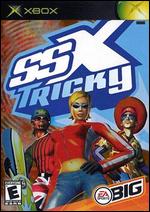