Yes, it’s true, we have some new Unreal Championship info for you:

- Let’s start off with Scott’s Domination2 map. It is looking pretty sweet! He made this cool looking Egyptian like temple that juts out of the rock face. So now he is in the process of making it nicely lit etc.

- Dan is working on some extra character skins. We are making sure that there are many characters to choose from in Unreal Championship.

- Where would we be without linking those Xbox video game systems up! Work is progressing on the network side of things and that will be a lot of fun.

- Also, work on the team and player profiles has started. It seems simple but programming-wise it is quite a bit of work, just like everything else.

- Justin has been working on a very cool particle effect. This will replace that lagging trail from the Shock rifle. Now the beam will be as instant as it should be.

- Starsky has been slaving away on the music for Unreal Championship. He made the music that was included with the first in-game movie, which is available right here: http://www.xbox.com/Games/action/unrealchampionship.htm. So if you haven’t checked that out yet, I invite you to do so. It might be cool to release another tune for your enjoyment perhaps ?

Thanks to Pancho.
Source: http://www.digitalextremes.com 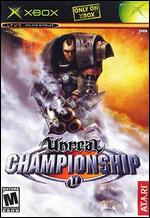 Xbox one no signal
Post by debrartin
0 Replies, 97741 Views