Ori and the Blind Forest: Definitive Edition, is being released on April 27 for gamers on Windows 10 and Steam.

Ori and the Blind Forest, a 2D sidescrolling platformer from developer Moon Studios, is a true visual spectacle. Players take control of the titular Ori, a guardian spirit who explores the haunting forest of Nibel – a breathtaking backdrop that imparts the magic of classic hand-drawn art with the help of some impressive tech. We asked our partners at Moon for a few thoughts on how they approached the Definitive Edition.

The Definitive Edition is all about making a great game even more accessible for players; besides new areas, music, story elements, and the additional Light Burst and Dash abilities, it adds a new Easy difficulty for those who’d like to relax a little and take in the sights of Nibel. Ori can even warp between Spirit Wells, the game’s save points, which makes for a faster and more streamlined experience. Fans can also now purchase official merchandise at the new Ori and The Blind Forest shop.

And on Steam, if you already own the original Ori and the Blind Forest, you can upgrade to Definitive Edition for just $4.99! 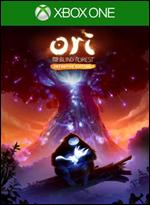