TOKYO – Tokyo Game Show – (October 12, 2001) – Sega of America today announced that two additional Sega titles from the company’s unparalleled game library will ship for the Xbox™ video game system in the United States. Sega has entered into an agreement with Microsoft®, granting them the rights to sell, market and distribute the only version of "Shenmue II " for the U.S. market. Sequel to the epic masterpiece "Shenmue " for Sega Dreamcast , "Shenmue II" is being developed by AM2, one of Sega’s top development teams, under the direction of Yu Suzuki, creator of the "Virtua Fighter " series. Under this agreement, Sega will work closely with Microsoft on all marketing efforts for the title.

Additionally, Sega will be publishing a new "Phantasy Star Online " title for Xbox. Developed by the celebrated Sonic Team under the direction of Yuji Naka, "Phantasy Star Online (working title)" has amassed more than 300,000 registrants since its launch and has garnered several awards, including the Fifth Annual Japan Game Award. Sega and Microsoft will be working together on the development, sales, marketing and distribution of the game, which will be designed to take advantage of the Xbox online and storage technology.

As Sega continues building toward becoming a platform-agnostic third party publisher, the company is focused on two goals: profitability and making great games. Based on this, Sega is looking to Microsoft to deliver significant marketing prominence and exposure behind these two leading Sega franchises during this transition year, while the company works toward increasing game development and continuing to meet key milestones.

"This agreement with Microsoft will give ‘Shenmue II’ and ‘Phantasy Star Online’ the marketing prominence and increased awareness that the titles deserve, while giving Sega access to significant incremental revenue as we work toward profitability goals for this fiscal year and onward," said Peter Moore, president and COO, Sega of America. "We expect that both titles will be ‘killer apps’ on Xbox and that the technical capabilities of the platform will surely bring both games to new levels in terms of graphics and experience."

"Sega is known for making some of the best games in the business and ‘Shenmue’ and ‘Phantasy Star Online’ are truly some of the best titles the industry has to offer," said Robbie Bach, Chief Xbox Officer (CXO) for Microsoft. "We are fully committed to working with Sega and Yu Suzuki’s team to ensure that ‘Shenmue II’ takes advantage of all that Xbox has to offer, to deliver gamers an even more revolutionary game than the first." 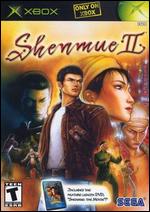