Hey football fans, anxious to see what’s upcoming for th next version of Madden?  Want to know who will grace the cover of the next game in the franchise.  Well, we may have some news for you.

Electronic Arts has officially announced that the Madden NFL 17 cover athlete will be revealed Thurs, May 12 live during the 6pm ET/3pm PT edition of ESPN SportsCenter. This is in contrast to the past couple of years where fans voted on the Cover Athlete of the yearly grid-iron game.  Fans will also get their first look at an all-new gameplay trailer.

As per usual, EA Access members can try Madden NFL 17 before it’s released for a limited time as part of a Play First Trial, only on Xbox One. 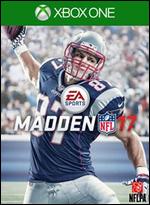