Rising Star Games has announced a new partnership with development studio Bitmap Bureau, to publish 88 Heroes on Xbox One. Targeting a release date of the 8th day of the 8th month (8th August 2016), Rising Star Games will be revealing a new hero each and every day for 88 days counting down to launch.

Rising Star Games and Bitmap Bureau are also excited to reveal that a global 88 Heroes ‘Design-A-Hero’ contest will begin very soon. Design your own fabulously mundane or magnificent champion complete with superpowers and title, and win the chance to see your creation appear in pixelated glory in the final game!

88 Heroes is a chaotic 2D platformer that is as fun to watch as it is to play, where each level completed or untimely death brings a new uniquely skilled hero into the action. With just 88 minutes to complete all 88 levels, you’ll need every one of the 88 heroes to stop the dastardly Dr. H8 destroying the Earth! Are you up to the challenge?

We have to say that we are somewhat intrigued by the title of this game and what the final product will hold.  Keep you eyes on Xbox Addict for information, as we’ll post it when we get it. 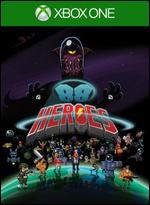