Wales Interactive have announced that they have teamed up with North Carolina’s Prologue Games to bring Knee Deep to Xbox One in Q3 2016.

Knee Deep is an episodic adventure game taking place on a grand theatre stage. Driven by narrative, Knee Deep is about characters, storytelling, and the melodrama of swampland Florida.

When a washed-up actor hangs himself on location, a spotlight is cast on the backwater Florida town of Cypress Knee. Your screen becomes a stage on which you investigate this mysterious suicide as three distinct characters: cheeky blogger Romana Teague, down-and-out local reporter Jack Bellet, and cynical private investigator K.C. Gaddis.

You’re the writer, director, and star of the Prologue Theatre’s performance of Knee Deep, a swamp noir adventure. In each episode, your choices push the characters from one set to another as they collect clues, uncover evidence, and confront wrongdoers.

We hope to have more information as this game gets closer to launch. 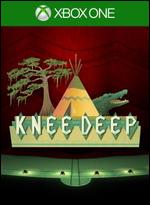