Dev-team Interabang are a band of developers and artists working on projects they love. Interestingly enough, the whole team is spread across Oakland, San Diego, Chicago, and Montreal, coming together thanks to wi-fi and a shared passion for games. Yep, they are not in one place at one time.

This ragtag group of developers across North America are said to have been raised on classic side-scrolling and fighting masterpieces, and they are currently hard at work getting an extra crispy, combo-packed 2D action game ready for Xbox One players. The gameplay, art, and humor in Super Comboman is said to pay homage to the super-rad 2D fighting games of the past and the manga comics we grew up with.

In their game, you’ll play as Struggles, a fanny pack-rocking Super Comboman fan looking for work. Head down to the local construction site, where you can jiggle, juggle, and jab your way to a paycheck! Struggles’ day is packed with wacky enemy combat, gut-punching special moves, and all-new combo animations.

The game is coming to Xbox Live for the very first time and we hope that we here at XBA can have more details once more information is released. For now the gameplay/announcement trailer below will have to do: 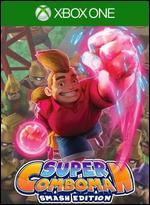