‘The Turing Test’ Launches Today on Xbox One

The Turing Test, the stunning first-person sci-fi puzzler built with Unreal Engine 4 is released today on Xbox One.

Published via ID@Xbox on Xbox One, The Turing Test is developed by Derby, UK based Bulkhead Interactive who previously released Pneuma: Breath of Life, and recently concluded a successful Kickstarter campaign - hitting their funding goal in three days - for their next project Battalion 1944, due to launch in 2017.

The Turing Test follows the story of Ava Turing, an engineer for the International Space Agency (ISA), as she attempts to uncover the truth behind strange events at the research base on Jupiter’s moon, Europa. As Ava, players must use their Energy Manipulation Tool (EMT) to transfer power from one object to another; powering up and taking control of artificially intelligent machines, manipulating giant structures and solving complex tasks - all set to a backdrop of a multi-layered narrative that challenges the player on what it means to be human.

Our review should be posted in a day or so, and we can confidently say it’s a solid game worth your time.  So what are you waiting for, head on to the Xbox Store and download this title. 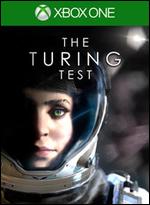