If you were one of the lucky people to snag up your copy of Star Wars: The Pantom Mence on DVD, on the second disc you’ve probably watched "The Making of Star Wars: Starfighter. The Game".

They talk about how they made the game and all that, and you see a logo of the Xbox at the end stating they are making a special Xbox version, but at the end they out right say that they are working on a sequel to Starfighter based on Episode 2.

So I imagine that something around the release of Episode 2, you’ll see the likes of the sequel just shortly afterwards.
Source: http://www.lucasarts.com/ 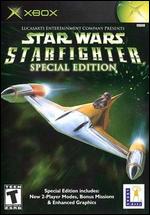