Ubisoft has finally announced that Assassin’s Creed The Ezio Collection will be available on November 17 for the Xbox One. Fans of the series, and new players alike, can relive the adventures of legendary Assassin Ezio Auditore da Firenze, as the franchise’s most celebrated games come to the current generation of consoles.

For those few new to the franchise the Assassin’s Creed series tells the tale of the centuries-old battle between Assassins and Templars through rich storylines and captivating characters. Assassin’s Creed is an action-adventure series set in fully realized open worlds throughout notable times in history such as the Third Crusade, the Golden Age of Piracy and the Industrial Revolution. Using the infamous hidden blade and other tools and weapons specific to the time periods, players will fight for the greater good from the rooftops in Italy to the shores of Cuba through the core tenets the series is known for: combat, stealth, navigation and parkour.

In addition to the single-player content, Assassin’s Creed The Ezio Collection includes the complete Assassin’s Creed Lineage and Assassin’s Creed Embers short films, giving a clearer glimpse into the background of the dashing yet dangerous Ezio Auditore da Firenze, from beginning to end. 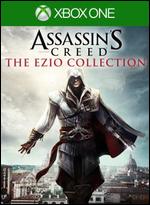