Today is the day that the full list of bikes in Ride 2 has been announced. And that’s not all, the Milanese developer is intending to surprise all its fans with a series of innovative digital content, as well as tons of freebies with Ride 2!

There are 174 bikes, including 16 modifiable models which spawn 16 new race models, which when added up arrive at a grand total of 190 bikes from 22 of the world’s most important manufacturers. The list is full of surprises: choose from nakeds, superbikes, supersports, electric bikes and, why not, let loose on one of the numerous two-stroke bikes, café racers and supermotos – which are this year’s real innovation!  Add to that monthly downloadable premium and free bike packs and you’re now looking at over 230 bikes available for fans to ride (see what we did there?)

Square Enix claims that Ride 2 is all about delivering more to fans – more bikes, more tracks, and even more game modes to play with, now increased to 15. If Ride had already got you used to taking on some of the most challenging and famous tracks, Ride 2 won’t fail to shock you once again! There are now 30 world-renowned tracks to race through, with new legendary circuits and different types of tracks. Following widespread clamor from the community, Road Race Tracks such as Nürburgring Nordschleife, Ulster GP and Northwest 200 will be included, along with the Supermoto Circuits such as Castelletto di Branduzzo, Ottobiano and Franciacorta.

Customization is a huge part of Ride 2, and now you boost your bike by modifying 5 main areas (Engine/Brakes & Suspension/Wheels/Transmission/Aesthetics) from over 1,200 real-world parts and accessories to create your ultimate dream ride. And don’t forget to customize your rider profile from clothing style down (Street/Race/Supermoto) down to the gear, riding style and poses. No racing game comes close to this level of customization!

The Day One Edition has been also announced.  It includes four exclusive bikes – the Ducati Hypermotard SP, Kawasaki ZZR 1400, Aprilia Tuono V4 Factory, Suzuki Hayabusa and a pack of 20 helmets which guarantee greater freedom when customizing your rider avatar. Furthermore, the dev-team could not fail to listen to its community and give it a truly exclusive present: 9 packs with special downloadable (free) content from February to July so that you can experience new exciting adventures every month on incredible dream bikes! 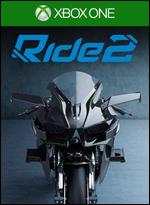