PSA - Firewatch is Now Available on the Xbox One

Firewatch,ia first-person mystery set in the woods of Wyoming, was officially released this week. What is this game you ask? Well, developer Campo Studios say that if it were movie, you’d call it a psychological thriller. But it’s not a movie; it’s a video game.

They set out to make a game where you get to build a relationship with other characters, while continually being surprised by the story, but not bogged down by a bunch of cutscenes. They love games like the Bioshock series, Half-Life, and Full Throttle and brought all of that to their own game Firewatch. It’s spooky and can get quite serious, but there’s also jokes about raccoons and poop so they think it balances out nicely.

Head on over to the Xbox Live Store and check out any trailer, gameclips or screenshots, and then feel free to download the game for yourself. 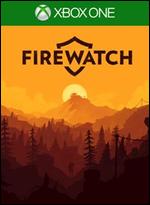